The Moon Set To Get 4G mobile network

When we are yet to haveÂ 4G LTE coverage in many locations on planet earth, the mobile giants, Vodafone and Nokia Networks are planning to set up and operate a lunar 4G mobile network in 2019. What? Yes! You heard me right, a 4G network on the moon. Wonder what it would be doing there?

According to the BBC, rovers based on the moon will be using the lunar 4G mobile network to stream high definition video back to a base station which will beam it down to earth.

A Lunar Roving Vehicle (LRV) or rover is a battery-powered four-wheeled vehicles that carries astronauts, their equipment, and lunar samples around on the Moon. 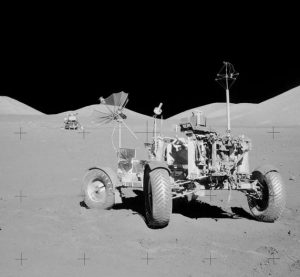 Why Do We Need A Lunar 4G Mobile Network?

Both manned and unmanned Moon expeditions collect lots of scientific data, including high resolution video and photos that needs to be transmitted. A 4G mobile network on the moon means less demand on a rover, freeing its power up for its primary task as a means of transportation.

This also suggests that astronauts can move around as far about as necessary without worrying about getting disconnected. Transmitting these heavy data directly from a rover to earth requires much power.

Live streaming of HD videos can also be done from the moon.

To an ordinary person, investing in space missions might looks like a waste of money, since there are many cities on earth that are still yet to experience 4G technology. Why talking about space now? But space technology and research has brought many benefits to life on earth in areas like agriculture, medicine and even mobile technology.

So, this idea and expedition isnâ€™t exactly a wasteful spending.

After the moon, perhaps up next is Mars. Who knows? Jâ€™onn Jâ€™onzz, the Martian Manhunter might be waiting in the wings to welcome us, and probably also relocate to earth.