Before phone manufacturers starts dishing out phones with the Snapdragon 845 chipset, Qualcomm is releasing its specs and how its performance looks like via a Qualcomm Reference Design platform.

The new chip uses new CPU core designs based on Cortex-A75 and A55. Thereâ€™s four of each in the Snapdragon 845, but they are no longer split in two separate clusters. This is the first SoC to support DynamIQ, which allows for a finer voltage/frequency control.

The max frequency was increased to 2.8GHz (for the big cores), up from 2.47GHz on the Snapdragon 835. No maker ran the 835 at max clock speed though and we expect the same this year (the last few hundred megahertz are rarely worth it in terms of battery cost). 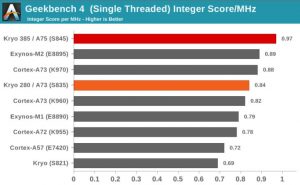 Aside the clock speed, the Snapdragon 845 processor shows major improvements in both integer and floating point tasks. This chip is built on a 10nm LPP process, which should allow for slightly higher clock speed for similar power usage so the real world difference between the S845 and S835 should be even more pronounced. 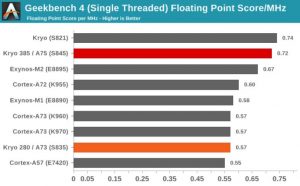 The new GPU â€“ Adreno 630 â€“ is quite impressive as well. GFXBench puts it and Appleâ€™s latest GPU in a class of their own. The Reference Design device traded blows with the iPhone X, both left a sizable gap to other Androids (including Huaweiâ€™s Kirin 970-powered Mate 10 Pro). 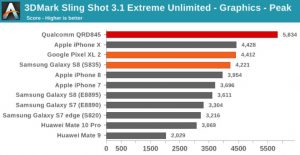 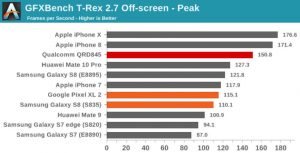 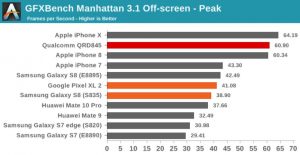 Impressive stuff from Qualcomm, the Snapdragon 845 is currently the fastest chipset to be used in Android phones. Of course, Samsung is yet to let people benchmark its Exynos 9810.