This report is going to tell you that MySpace was never dead and that it still rakes in about 15 Million monthly visits, though a far cry from its rivals. MySpace was launched back in August 2003 and in five years, the social media network had attracted a user base of about 75.9 million users. It was once the largest social networking site up to 2008 when Zuckerberg brought up his own.

In 2010, MySpace had a nose dive when its user base was cut by close to 50%. One of the major reasons for this has been speculated to be the platformâ€™s failure to innovate and match other platforms such as Facebook and Twitter that seemed to be more exciting for users.

MySpace has seen its fair share of struggles, especially when it comes to staying afloat. The social site was changed ownership as much as slay queens change their weaves and in 2011 it was sold to Specific Media Group and Justin Timberlake, for approximately $35 million, a small percentage of its peak $12 billion valuation a few years back.

With this new acquisition, MySpace changed tact to focus to entertainment. Its main strength was to bring artists and their fans together on one platform. After this change in focus, the once dying MySpace had a new breath of life. The new focus in entertainment saw the platform attract over 14 million artists using the platform in 2015, with 53 million songs uploaded on the platform at that time. 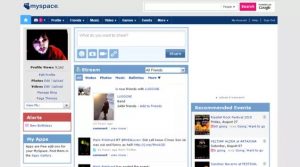 In 2016, the platform changed ownership once more after its parent company, Viant, was bought by Time Inc. As much as MySpaceâ€™s 15 million monthly users is not comparable to the likes of Facebookâ€™s 160 million, MySpace is attractive to more people than Googleâ€™s Hangouts which gets 14.62 million users per month.