Microsoft Eliminates Use Of Passwords Security On Latest Window 10 Version

Is elimination of passwords from your computers part of technology revolution? That I can say say for now but could be another trending security update for a while. Well, don’t worry about using your computer without password, since there are other alternatives – PINS, Facial Recognition and BioMetrics. Well for me, I love using PINs because I already have a junk of passwords on my head.

In its latest operating system – Windows 10, – Microsoft has invested heavily in the aspect of security and access control.

The latest build dedicated to the Insiders now brings a unique novelty: Windows will abandon the passwords. However, this new feature is, for now, limited to Windows 10 S only.

In the newly arrived build 17093 Microsoft wants to end the passwords and start using authentication through the Microsoft Authenticator app.

The end of passwords and the use of other authentication mechanisms, simpler and, at the same time, more secure as well.

Microsoftâ€™s own Authenticator application or other biometric mechanisms will be enough to allow you to access Windows 10 or any other area that requires user authentication.

Microsoft plans to go further and remove passwords from all over Windows.

With this change, everything is focused on what the tech giant Microsoftâ€™s Windows Hello has to offer, from facial recognition to the use of the PIN to unlock. 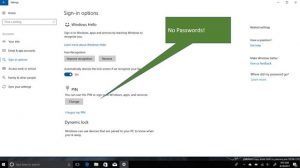 This is Microsoftâ€™s first step toward removing passwords, delegating biometric sensors to all authentication processes.

For now, the Windows 10 S will be the only OS with this feature while other versions may probably get it later.