Facebook wants you to start sharing your to-do lists and also rank your favourite things. The company’s new Lists feature will be seen as an option on the status update bar. Facebook predicts that with users sharing their top five food cravings, goals for the year, and plans for upcoming trips via the new feature, will spark conversations with their friends. 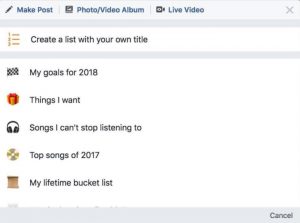 This new feature follows Facebookâ€™s pledge to make its platform better for society. The company’s own research has discovered that passively consuming information over Facebook can be bad for your mental health. So it’s determined to encourage more discussions among friends and family. 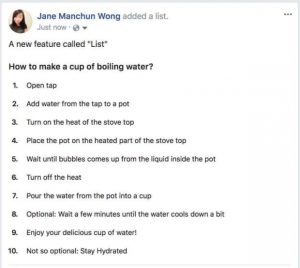 The big social media owner said it will be rolling out the new feature bit by bit, so if you donâ€™t get the new feature now, just be patient, and you will get it later. But then when it does, you’ll be able to create lists that can be personalized with different colors and emoji and organized via bullet points or numbers. (Android users will have access to the feature first, although iOS users will be able to see the created lists on Facebook.)

Furthermore, users will be able to “clone” any lists they see in their Facebook News Feed and nudge their friends to answer the lists they post.

Rumors of a potential list-creation feature surfaced last month when the company appeared to be testing it among select users. On Tuesday, Facebook’s head of News Feed, Adam Mosseri, pushed back on claims that lists are designed to collect advertising information on your favorite subjects. 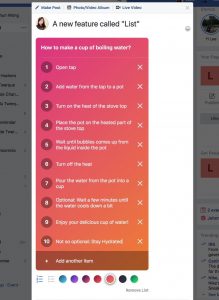 He tweeted, “Actually we built lists because we saw lots of people creating lists as long statuses and with pictures, and thought it would be good to make it easier for people to create lists first class.

“I hope we can get to a point, someday, where you don’t always assume ill intent”.