Guess we have seen enough of cases and 3D renders of the Galaxy S9. The locks have now been opened and the hands-on photos of the real device were inevitable.

The photos revealed the front of the upcoming flagship as the phone boots up as well as the back with the redesigned camera/fingerprint reader assembly.Â There wasnâ€™t any uncertainty on the matter, but the Bixby button can be seen on the side â€“ Itâ€™s still there. 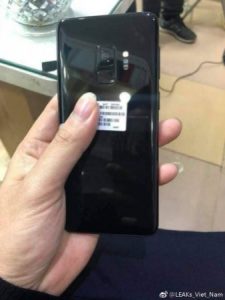 Talking about the colours, as you can see, this is the Black color option of the Galaxy S9, one of four color options to be launched on coming Sunday.