YouTube has grown greatly since its origins as a video repository before being bought by Google. It now boasts of over 1.5 billion monthly active users and millions of channels where you can watch almost everything.

Virtually every of its users knows that they can make money on YouTube, thanks to its integration with Google assets. However recently, YouTube made some changes, particularly in the aspect of monetization where it required channels to have a minimum of 10,000 views before they start earning money on the site. This change was done last year and now, this year, the popular streaming platform have announce more rules which could have a negative effect on smaller channels than ever before.

After careful consideration and extended conversations with advertisers and creators, we’re making big changes to the process that determines which channels can run ads on YouTube

YouTube now requires new channels to have 1000 subscribers and 4,000 hours of watchtime within the past 12 months to be eligible for ads. And that is not all, it will also check for other signals like strikes, spam or abuse flags to determine whether the channels are suitable for advertising. 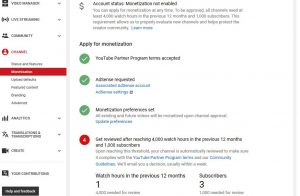 According to YouTube, these changes are geared to reward creators who make engaging content and prevents spammers from gaming the system. Although these changes will affect a significant number of channels, YouTube says that the creators who will remain in their YouTube Partner Program represent more than 95% of YouTube’s reach for advertisers.

It also said it will be implementing these requirements for existing channels effective February 20th 2018.

Furthermore, YouTube will now manually review channels included in Google Preferred and ads will only run on videos that have been verified to meet their ad friendly guidelines.

This actually sounds discouraging for people that are yet to meet up, both old and new, what do you think?

How To Fix Disabling Of Android Phones’ Bluetooth by Google Play...