Google’s Chrome OS has effectively been able to produce a reasonable and sizeable portion from the saturated OS market for itself, basically in the education world. Now, as the exclusive OS is officially getting more Android app support and on its way to a new Android-inspired, touch-friendly UI update, it look as if it will be expanding to tablets as well.

The first tablet in the world running Chrome OS has just been spotted at an education event in London and it should soon become official. The Chrome OS tablet comes from Acer and made an appearance at the Bett Show 2018 where companies showcase various technologies designed for educational purposes. 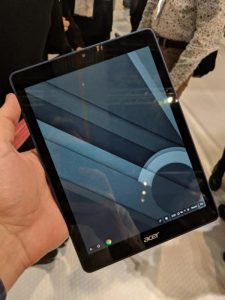 Acer has only announced two Chromebooks and a Chromebox for now, but the Chrome OS tablet seen above is said to be real as a Bett Show attendee spotted it at the event.

Their tweet containing the original image has since been removed, perhaps because Acer might have asked the attendee to take it down until it makes things official. As of Friday morning EST, no announcements of Chrome OS-powered tablets has been made by the company.

Without any official announcement, it remains unclear what the device will be called, what specs it will have, or whether it will be solely meant for education or available to the general public as well. So far, there have been Chromebook laptops and even convertibles that allow users to work in tablet mode, but a real, standalone Chrome OS tablet has never been commercially available.

Since Acer is showing off the Chrome OS tablet at the Bett Show 2018 this week, the company might soon be ready to offer more information about its upcoming product.

The photo posted by the Bett Show attendee shows the tablet in a portrait mode, with a screen size that seems to be between 8 and 10 inches, and a 4:3 aspect ratio. A front camera is located in the middle of its top bezel, while the Acer logo is centered on the bottom bezel.

The user interface clearly shows that the device runs Chrome OS, but it should also be able to launch Android apps. According to recent reports, the tablet may be the result of the project â€œScarletâ€ Acer has been working on for several years now, and it might also come with a stylus from Staedtler. The Chrome OS build in the emerged photo also shows a menu with additional pen tools, further suggesting that the tablet will ship with some kind of a stylus.

Having a mature OS like Chrome OS on wide screen seems to me the best thing that is about to happen to tablets. Tablets may now have the opportunity to displace Laptop. What do you think?

Official: You Can Now Use Other Networks On Ntel N1 Nova