A lot of rumours have been flying around our ears for ages but it appears they are about to be real – the bendable phone from Samsung. The Korean company has just confirmed officially that it will commence the mass production of “foldable panels” this year, and we can think of an application or two for them. Samsung states the strategy for 2018 sales via its press release:

AS FOR THE MOBILE BUSINESS, SAMSUNG WILL CONTINUE ITS EFFORTS TO DIFFERENTIATE ITS SMARTPHONES BY ADOPTING CUTTING-EDGE TECHNOLOGIES, SUCH AS FOLDABLE OLED DISPLAYS.

This simply means we should be expecting what might be a battle ground or create a trend among phone manufacturers. The alleged foldable Galaxy X, or Wing, or whatever it names it, is said to at the “almost finished,” stage.

Samsung reportedly brought both infolding and outfolding prototypes at a secret meeting around the CES expo earlier January, and its presentation attracted larger than the usual crowd of investors and carrier reps this year, as the product is finally close to retail release, tipped insiders at the time. The agile Galaxy it outs will likely retail the infolding type, keeping the outfolders for a next generation of bendable handsets due to their higher curvature when folded, hence the need for increased durability. 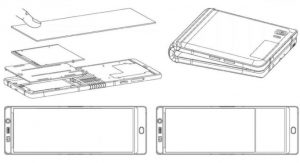 If you are wondering what “infolding” means, look no further than Samsung’s latest patent on the matter in the slides below. As for the actual screen size when unfurled, the sources confirmed that it will be a 7.3″ monster, allowing you to watch videos in relative comfort, then simply snap it shut, and tuck in your pocket without a second thought. Unfolding will reportedly be done at the push of a button, if Samsung’s numerous patents on the matter become reality in some shape or form.