Reports have been going round that some states have started issuing posting letters to N-Power pre-selected applicants. A example of such letter is displayed in the image below. Well, N-Power itself has officially released a press statement pertaining this issue. Read the press release below.

ALSO READ: Nigerians Develops a Twitter Bot to Help you “Shoot your Shots”

It has come to our attention that some states have been awarding posting letters to N-Power pre-selected applicants.

LET US BE VERY CLEAR

At this point, there are ONLY Pre-Selected applicants, we shall announce and release the names of the FINAL SELECTED BENEFICIARIES when we have finished reviewing the returns of the Physical Verification compilations.

We will assume that States who are currently deploying PRE-SELECTED APPLICANTS are expanding their charity base as we currently have NO ENGAGEMENT with these pre-selected applicants until we have announced and communicated same.

We are currently reviewing the returns of the Physical Verification compilations and we shall communicate progress and next steps on our Social Media Channels.

Have a great Sunday 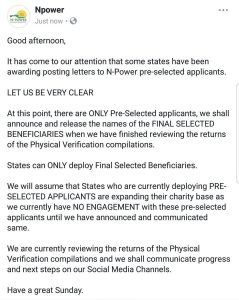 Do we now have smart jersey? Nike brings on NFC tags...