Instagram has introduce a new activity status feature to its iOS and Android app. Since the company is yet to officially announce the development, it’s possible the feature is still under testing and not available for everyone. However, it does seem to be available for most users right now.

Reports have been going round that Instagram is planning to make direct message feature a separate app and this could be an effort towards that. 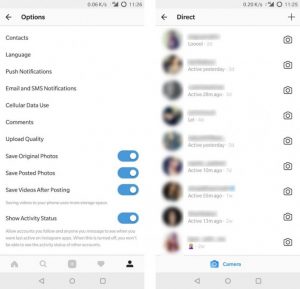 With this new feature, which is enabled by default in the app settings, users can go into their direct message inbox and see the activity status of the people they have messaged below their name. This appears for people you follow or have previously messaged. You can select from arrays of status mode, ranging from ‘Active…’ a certain time ago or a very specific ‘Active now’ if the user is browsing Instagram at that very moment.

Don’t get confused, if you don’t understand what I am saying, there’s an option to disable the feature in the app. Once you disable Show Activity Status, you will stop seeing status for other people they stop seeing it for you, just the way WhatsApp status works.

Samsung Galaxy Buds and Galaxy Fit May Be Unveiled Alongside Galaxy...