The Android 7.0 Nougat was seen as big leap for the Android series and it came packed with a lot of new features that helped the Operating system as fluid and seamless as possible. Part of the additions to the Operating System functions is the ability to divide the screen of your device into two equal halves and run two apps simultaneously.

Imagine you are running a bank app, and you use one of these budget devices that is poor at multitasking. You get to a point and you are required to input your OTP and the moment you leave the bank app to your SMS inbox, the bank app closes and you have to start all over again. Imagine the frustration. The Split screen function is also one of the most underrated functions on the nougat.

This function is so important, it is also present on the latest Android 8.0 Oreo, but in a much more improved version. I recently met a friend and we were discussing and I talked about the split screen, and to my amazement, he couldnâ€™t activate it. This prompted me to do an article on it.

Activating a split screen on an Android device running on Android 7.0 and above is a piece of cake if you know how to go about it, but an uphill task if you are a novice in that field. Here are some easy steps to activate and enjoy the function. 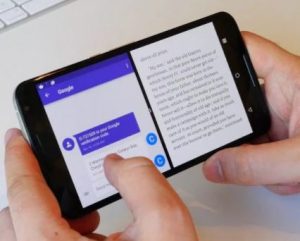 Step 1: First you need to activate the developer mode. This is not really compulsory, but it would help you force some apps that were not designed to work with the split screen function to work by force. To do this go to Settings > About this device > Build number. Once you are there, click on Build number a few times until you get a notice saying you are now a developer.

Advertisement
ALSO READ:  Meizu 16 Specifications and Price: How About AI Taking Charge Of Your Camera?

Step 2: Once in the developer mode, scroll down to the end of the page and enable the option that says â€œForce activities to be resizableâ€. Once you do this, restart your device to activate the option. Once you have restarted your device, even those apps that arenâ€™t usually compatible with the split screen option will be able to run in split-screen mode.

Step 3: Click on the recent button and click and hold any open app, then drag it to the upper part of the screen. Once you do that, you would see the screen has been divided into two.