Facebook is home for people to link up each other, share their thoughts, share posts from several publishers. These are presented algorithmically and are random in nature.

This implies that Facebook decides with the use of their algorithm what you see on your feed and continuously tweak it for a certain goal. Weâ€™ve seen them tweak the algorithm to demote fake news, engagement bait and the likes and now it’s doing something that is even more drastic.

Yesterday, Facebook announced that it will be making a change to the Newsfeed where its will prioritize posts that â€œspark conversations and meaningful interactions between peopleâ€ and posts from friends and family. 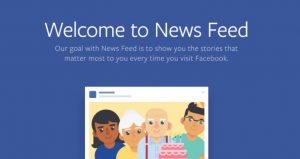 Facebook also said that due to the space in the News Feed being â€œlimitedâ€, this means that they will show less â€œpublic contentâ€ which includes videos and posts from publishers or businesses. This means that Facebook Pages will see their reach, referral traffic and video watch time decline.

Facebook says that this effect on Pages will vary from Page to Page due to factors like the type of content they produce and how people interact with it. So generally, those Pages that have posts that people generally donâ€™t react or comment could see the biggest decrease in reach.

You would think that this would lead Pages to use engagement bait to make sure that their posts rank higher in the feed. However since Facebook made the change to prevent such cases from happening, this behaviour coupled with the recent change could lead such content being demoted further.

This move coincides with Mark Zuckerbergâ€™s challenge for the year where he wants to make sure time spent on the social network is â€œwell spent.â€ This is going to be a tough year for Page Managers and theyâ€™ll have to develop new strategies in light of the new changes.