Doogee V comes with a huge 6.2 inch display that features full HD resolution. According to the company, the smartphone has a flexible display.

Forget iPhone X, Samsung Galaxy S9, Nokia 9 and others in those categories for now, the Chinese mobile phone maker, Doogee is ready to prove that they can do more than what you think about them. Doogee is coming up with a phone it dubbed Doogee V that has a feature that no other phone has – even the likes of Samsung are still pushing hard to that. 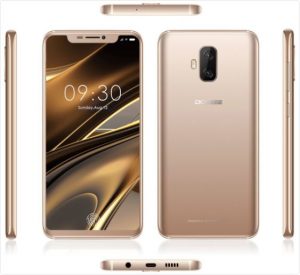 A picture of the phone was also tweeted by a popular tipster @Evan Blass, though the device is yet to officially launch till now.

According to a video released by the company itself, the Doogee V features an on-screen fingerprint sensor – making it the first phone in the world to command one. Thus far, phones have either been positioning their fingerprint sensor below the front screen or on the back of the phone.

The phone boast of a huge 6.2 inch display that has full HD resolution. The phone also has a flexible display as revealed by the company.

Another feature worth mentioning is the iPhone X design-like feature it has and talking about cameras, it has backs cameras along with dual LED set up.

In the aspect of connectivity, there is a USB type C port in the device whose body is blessed with metal covering. The Doogee V will be unveiled at the CES 2018 this year.