BitConnect styled and called itself an open source community cryptocurrency whose main goal was to enable participants to store and invest their wealth in a non-government controlled currency, and even earn a generous interest on their investment. The community started this business way back in January last year with the BitConnect Coin (BCC) worth $0.16 but just after one, the coin appreciated to a value around $400.

Participants would invest Bitcoins by depositing them on the platform and buy BitConnect Coins (BCC). Investors would then store the BCC on their wallets and earn interest from it, similar to conventional banking operations, or the investors could decides to trade the coin and try to profit by selling them at a higher price and buying them back at a lower price, similar to stock marketing.

On January 16, 2018, BitConnect announced that it would be shutting down its lending and exchange platform which was a main deal, since investors of BCC makes money from lending out the currency (BCC) on the platform. Just after 24 hours of the announcement, the price of BCC dropped by 90% to roughly $17.25 but later rose again though has not been stable. At the time of publishing this post, it was trading at $32.43, an improvement but still a far cry from where it was a couple of days ago.

BitConnect says that bad press and legal issues were among the reasons for the shutdown but people believe that it was all a Ponzi scheme that has left thousands of people in debt even as investors cry foul on the Reddit: Below are some of the reactions on Reddit; 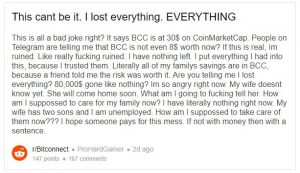 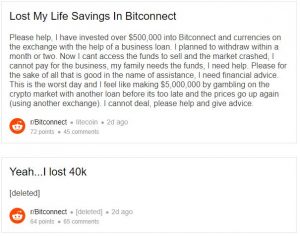