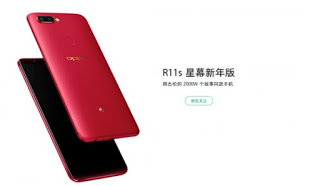 A new variant of Oppo R11s smartphone has been announced by
the Chinese company. Called New Year Anniversary Edition, the new model is
being launched to celebrate the forthcoming New Year.
The new smartphone comes in the red in terms of colour, it
has a gold rim border on the rear camera setup and golden logo. It also has a
small golden dot close to the bottom. Specifications and price tags are
expected to be remain same. No exact details on availability yet.

Owners Of Bricked Xiaomi Mi A3 Gets Free Repair Offer