HMD Global has begun to roll out a new update to its Nokia 8 smartphone. The change-log outlines things like enhanced system stability and user interface improvements, away from the normal December security patch. 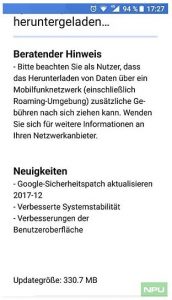 This new update – which comes as Oreo version 4.390 and 330MB in size – is presently hitting units in some European markets. It’s worth stating that the phone has already received the December patch in some markets (like India), but these extra changes weren’t included in that update.