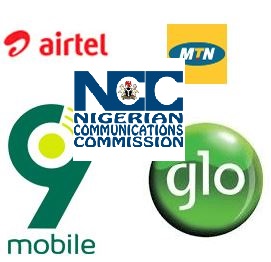 A new report has emerged from the Nigeria Communications Commission (NCC) which discloses that major telecom operators have lost about 14.3 million active subscribers within 10 months. This simply implies that 9mobile, MTN, Glo and Airtel active subscribers base dropped from 154.7 million in January to 140.4 million in October, 2017.
Details


MTN and 9mobile recorded lost of 11,528,125 and 3,400,894 subscribers respectively as Airtel and Globacom gained 422,925 and 190,031, accordingly between January to October.
As a result of the deduction of subscribers from 9mobile and MTN base from January to October 2017, MTN and 9mobile lost about 27.32 billion potential voice revenue within the 10 months period under review.
The porting activities experienced by telecommunications service providers in October fell to 19,419 from 33,504 recorded in the month of September.
In terms of outgoing porting, 9mobile lost 3,088 subscribers to other network providers; MTN lost 2,777 subscribers; Globacom lost 2,409 subscribers; while 1,432 subscribers left Airtel, making a total of 9,706 porting activities.
ALSO READ:  2017 Report Reveals Salaries of top MTN bosses in Africa

All You Need To Know About The Newly Revised MTN WELCOME...

How to get 750MB for just N200 on Etisalat network