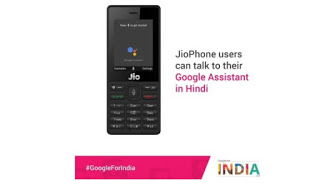 Google announced a chains of new features and initiatives intended
for India and the developing world at large during the Google for India event
in Delhi. The most notable one is Android
Go, a lightweight edition of Android made for cheap and entry-level devices
that have little storage and less than 1GB of RAM. However, Google is not only
throwing all its concentration on low-end smartphones.
Related Posts

In spite of the growing dominance of smartphones, there are hundreds
of millions of people that still maintains their stance with feature phones that
not have any business with Android, but can do internet connectivity. Thus,
Google wants to bring its Assistant to such phones, and this will be starting
with the Reliance
JioPhone.

JioPhone is a 4G feature phone that runs KaiOS, a custom
operating system based on Firefox OS. It was launched earlier this year and
available for free (with a deposit) to Jio subscribers and it actually features
its own voice assistant, dubbed HelloJio.
Now, the search giant is introducing a customized version of
Assistant – with Hindi voice support – to the device, and this would be housed
by the JioPhone’s 2.4-inch QVGA color screen. Well, the interface may like be
different, but the core functionality of the service is expected to remain the
same. This simply implies that JioPhone users will get to enjoy many of the
same features that are available to smartphone users.
There is no information yet if Google is working with other
feature phone makers too (Nokia could be a good contender). Currently out of
780 million market in total, about 500 million feature phone users are in India
alone. Google must have seen this untapped potential.