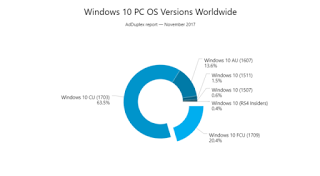 Huawei Launches New HarmonyOS Logos for the Chinese And Global…

Though, Microsoft set itself a target of 1billion for the year 2017, but it’s still a good success, leaving the company a short 300 thousand that refused to connect to Windows 10. In comparison with what Apple’s achievement of about 100 million devices (In April) as against 600 millions then, you will understand that it’s a good success for Microsoft.
Currently, one would wonder how many of the 700 million Windows 10 devices are used by Nigerians because a good percentage of the population are still stuck with Windows 7 or 8.
Share

Google Announces The Best App, Games, Movie, Song And So Many More For 2017

TikTok To Sue The US Government To Challenge The App Ban

Prev Next
Leave A Reply
Cancel Reply
Stay With Us

Device Comparison: Realme C11 vs Redmi 9A vs Redmi 9C

Huawei Launches New HarmonyOS Logos for the Chinese And…

WhatsApp To Let You Sync Chats Between Android and iOS…