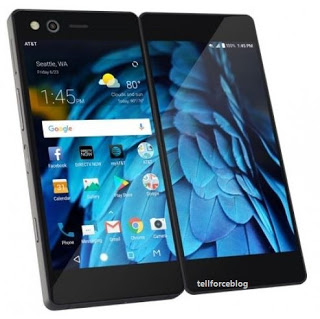 The much anticipated
ZTE Axon M (codenamed Multy) has finally been officially announced today. This
can be dubbed a flip smartphone, or a foldable type like its maker would want
you to. Actually, this is not the kind of foldable device most tech lovers
would wish to see, because, what we are going to show you is a two-screen phone
with a hinge in between.
When folded, the Axon M comes with a display on either side.
And when unfolded, the total viewing area gives a 6.75-inch display, but the
bezels don’t help generate the impression that the user  is looking at one screen and not two.

Both screens are 5.2-inch 1080p LCDs, and this provides the
user four various ways of using it.

The Axon M is powered by the Snapdragon 821 chipset, which
is supported by 4GB of RAM and 64GB of internal storage.
As far as camera is concern, due to its folding abilities
the phone can only boast of a camera unit and that is a 20 MP. It also comes
with a dual speakers and a 3.5mm headset jack. Talking about its battery
capacity, there is a 3,180 mAh battery to keep the user’s fingers alive on the
device. The Axon M runs Android 7.1.2 Nougat.
On availability, It will start rolling in from next month in
the US. It will also be launched in China, Europe, and Japan later in the
future.
AndroidAxon MZTE
Share

All about MTN Audrey Care