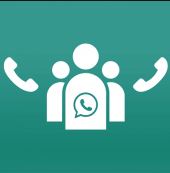 Group chat on WhatsApp has been on existence for long now
and very soon voice calls would soon finds its way into the WhatsApp groups. This
is a new project coming from the Facebook-owned company.
WhatsApp has never stopped
rolling out new features to its messaging app. About this time last week, the WhatsAppBusiness app was released and made available for download and yet again, more
features are still coming up.
According to a report from webetainfo,
the new WhatsApp group voice feature is currently in the developing stages, so
it’s not available yet.
Remember that we are still waiting for the RECALL feature,
even though another leaked info about voice calls in WhatsApp group is here. Guess
the latter may come early next year as the RECALL option is imminent.
However, we stay tune with us as we will always be there to
keep you posted on any latest update.
Join Us On Telegram
ALSO READ:  Redmi Note 9 Series Dissembled: See The Differences Between the 4G and 5G models
Advertisment