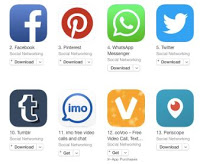 When most Americans pick up their phones to play around with
it, there’s a good chance they’re moving straight to their Facebook handle.
The social network has become a great hub for connecting
with friends, making new friends, finding long lost relatives, and surfing for
news. And Americans are most likely to fall back on it several times a day than
any other social media service. Over half of U.S. mobile users check Facebook’s
app multiple times a day, according to a new AudienceProject’s report.
Related Posts

Other social media apps and sites are also catching on with users.
However, Facebook has an advantage there too. WhatsApp and Instagram, which are
positioned in second and fifth in terms of the portion of U.S. mobile handlers
that check them several times a day, are also owned by the social networking
behemoth. 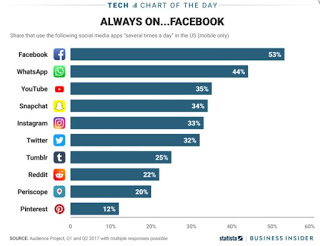 Remarkably, Instagram was barely shoved aside by archrival
Snapchat in this comparison. The two companies have spent the past year
battling it out for user attention, and Instagram has made a habit of
duplicating many of Snapchat’s most popular features.