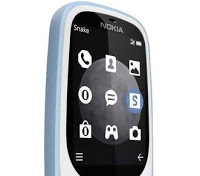 The Nokia 3310 3G,
which was announced late September this year, is now available for pre-ordering
in Europe. The first country where this pre-order will kick off is Germany.
Retailer Digitalo sells the phone at €69.90, which at the
current exchange rate translates to $82. Shipments will start from November 30.

The handset will also be officially be available in the
United States and Australia, as confirmed by the manufacturer itself on the day
the phone was announced.