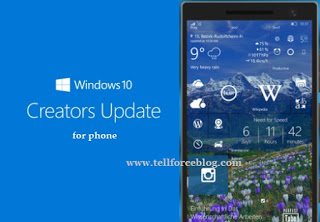 Though
Windows Phone 8.1 has been confirmed dead by its maker but Windows 10 is
still alive. The Windows 10 Mobile Fall Creators Update (Version 1709) is only available
for some selected Windows 10 Mobile powered phones.
Microsoft has today released a list consisting of mobile devices
that are going to get the update but funny enough, the Microsoft Lumia 640 and
Microsoft Lumia 640 XL are found wanting on the list. The duo were launched in mid-2015,
and now, it’s as if Microsoft has dropped the pair from its support room.
Below is the list of the phones released by Microsoft receiving
Windows 10 Mobile Fall Creators Update. However, please note that some of them
are out shelves.
Related Posts

There is an important message from Microsoft that says that
before you download and install the update, ensure your handset runs on Windows
Phone 8.1 GDR1 QFE8 or later. Also, since the size of update weighs 1.4GB, Wi-Fi
network connection would be needed. Finally, you will need to free up some of
your phone’s native storage. Unfortunately, this will force you to delete most
of your files, whether needed or unneeded to complete the update.

The latest update comes with the latest emoji from Unicode,
Two Factor Authentication to make phone more secure, and a few fixes of bugs.
Share

Android 8.1 Oreo to arrive in coming weeks as confirmed by Google