The much hyped Google Play Protect which was supposed to be an
ultimate shield  for Android phones
against malware appears to be in help too. According to a report from independentGerman antivirus test lab, AV-TEST, the security app is not as reliable as many
would think.
The report shows that Google Play Protect can only fight successful
against about 65.8% of latest malware and less than 80% of old malware. To make
the matter worse, the second-worst Android AV product that AV-TEST tested
—Droid-X 3—is said to be better than Google Play Protect. 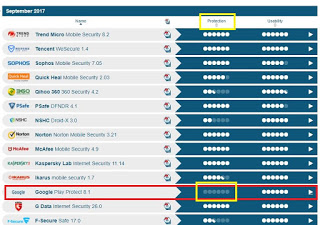 Google’s Play Protect report is so bad that AV-TEST rated it
a zero out of 6 in malware protection. This simply means, the developers has a
very long way to go in terms of improvement. Until such happens, it’s better you lookout for an improved
and reliable antivirus to keep your data from malwares.

Android Auto now allows phones to be Usable while connected