Five Cable TVs That Have Tried To End DSTV’s Monopoly 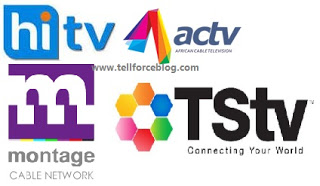 The arrival of the new cable network, TSTV has yet again
brought back smile to the face of Nigerians, believing DSTV monopoly may have
finally come to an end.
Multichoice has dominated the Nigerian market, mainly due to
a lack of choices more than the fact that it offers so much more, except when
rain falls or the irrelevance of over 100 filler channels becomes obvious.
Before the introduction of TSTV, numerous cable television
brands had tried to break this “strange and
expensive” domination, to varying level of success. Below are five cable
companies who wish to be the Anthony Joshua who won against the great Wladimir
Klitschko but varnished into the thin air like smoke.
African Cable
Television (ACTV)

ACTV is a direct-to-home (DTH) television service that was established
in 2013 but the brand’s services launched in November 2014.
ACTV market targeted the middle class in smaller cities of
Nigeria. It came with four bouquet plans: Satelio,
Prime, Family and Family Plus,
in order of the subscription costs.
The range of channels combines usual suspects like NatGeo
Wild, MTV Base and Nickelodeon with unfamiliar options like Magic and VH1.
Montage TV
Montage TV is a pay TV service that has operated, although
on a small scale, since 2014. The service operates in various Nigerian states,
as well as some countries in Africa.
With over 36 channels, its main strengths are in news (where
it has the common channels), documentaries and lifestyle. Montage TV takes
pride in its affordability which has proved popular in the South-South and
among some families in bigger cities.
The decoder costs 15 thousand naira. There is only one
subscription plan which provides access to all channels for 3,500 naira.
HITV

Toyin Subair’s idea will be remembered for coming the
closest to ending DSTV dominance. The service pulled a masterstroke by securing
exclusive rights to the English Premier League, blindsiding the competition for
over a year.

HITV was an upper-class product, but many viewing centres
and leisure spots used its service for match-day broadcasts or to entertain
guests and patrons. HITV also had channels like HiNolly and others which
created and broadcast local content in line with the platform’s programming.
Ultimately, after two seasons, HITV lost the exclusive
rights to the football leagues and an exodus of subscribers began. Soon after,
news of financial malfeasance began to break on blogs. Months later, Subair
announced that HITV had become bankrupt.
Frontstage Satellite
Television (FSTV)
FSTV was introduced to the Nigerian public in 2011. The
project was said to have been financed by a consortium of Nigerian banks.
FSTV was directly created to tackle DTSV and its roll-out
made a lot of the fact that it came not from South Africa but Europe.
The service had over 50 channels, including a mix of
franchise and major network channels like CNN, BET and Discovery, and its own
localized channels; FSMovie, FSMiracles and more.
FSTV was among the first to introduce scratch cars instead
of making long trips to the bank or dealership. The enthusiasm of this project
was not matched by the profits and a while after it launched, FSTV died a quiet
painless death.
TSTV
The new pay-per-view cable television network has introduced
itself with more attractive options than you might feel you deserve; apart from
a decoder that lets you pay for only the content that you have viewed.
It also offers 100 channels, including 10 sports channels
that will sound like a gift to most football fans.
Users will also have access to a free data bonus of 20 GB,
along with a front-facing camera for video calls. The decoder will also have 50
GB of space for users to save their favourite shows and matches.
Its price plans are also a major talking point; the decoder
costs 5000 naira and subscription plans vary between 200 naira and 3000 naira.
TSTV is set to officially launch on October 1, 2017.
Can TSTV do what most consumers loves? Break that monopoly thing and let Nigeria move forward in Digital TV world.
ACTVDSTVHITVMontage TVTSTV
Share