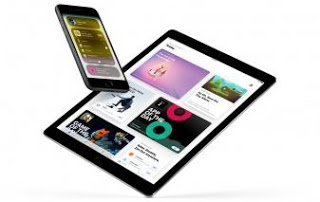 Apple has yet again released an update which it tagged iOS
11.0.3 for iPhone and iPad. The size of update is just about 285MB and comes
shortly after the iOS11.0.1 (which came out about 3 weeks ago) and iOS 11.0.2 update that came
out last week.
Main reasons for the latest update is bug fix and also for
two key issues affecting earlier models. The first is an issue audio and haptic
feedback on the iPhone 7 and iPhone 7 Plus, which seems not to work in some
cases. The other is a touch input responsiveness problem on the iPhone 6s units
serviced with non-genuine parts. 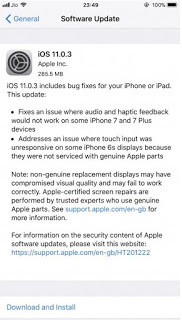 Apple also used the opportunity to warn against the use of
non-genuine replacement displays, which could negatively affect visual quality.
You can download the latest update over the air or via
iTunes.
ALSO READ:  Car and Phone Manufacturer Comes Together To Announce Digital Key for Unlocking Cars
Advertisment

How to Change Your WhatsApp Payment Authentication PIN on Android and...