Windows 10 Update: Microsoft’S Latest Operating System To Get An Update In October

Microsoft is bringing the Windows 10 Fall Creators Update to your PC on October 2017.

Some of the features to expect on the new update include enhancing Pen and Inking tools, adding a new 3D Paint system, unveiling the powerful Remix video editing and 3D creation tool, and fully bringing its mixed-reality platform, Windows Holographic to Windows 10. 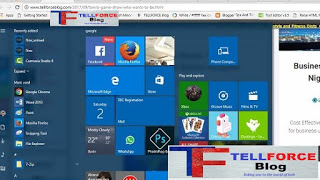 â€œOur mission at Microsoft is to empower every person and every organization on the planet to achieve more,â€Â said Microsoft Windows chief Terry Myerson in a press release.

Others include the feature called Timeline which allows you to

â€œjump back in time to find what you were working onâ€ at some point in the past. Functionally, Timeline is something of an extension of Windowsâ€™ Task View, only now youâ€™re able to see â€œa visual timeline that displays what you were doing when, you can easily hop back into files, apps and sites as if you never left.â€œ

This also applies to Timeline-supported Microsoft apps running on your smartphone. So you could â€œlook backâ€ at, say, a Microsoft Word document you only opened on your iPhone.

Next up, a (very creatively named) feature called â€œPick Up Where You Left Offâ€, which lets you start a task on your Windows PC, say editing a Word document, and pick it up on your phone exactly where you left off. A bit like Appleâ€™s Handoff, the feature uses Cortana (so yes, youâ€™ll need the Cortana app installed) to enable the switching

Finally, Microsoft introduced Clipboard , which lets you copy and paste between your Windows PC and your smartphone, even if itâ€™s an Android or iPhone. That may sound impossible but thereâ€™s one caveat: On iOS and Android the feature is powered by SwiftKey (thatâ€™s the keyboard app Microsoft acquired for $250 million last year), so youâ€™ll need to have that app installed in order to use the feature.

It is not yet clear how Microsoft intends to push users to update, but it is popular opinion that the most secure Windows systems are typically those that are most up to date.

To install the update as soon as possible after October 2017, make sure to allow automatic updates, which you can schedule for the overnight hours.

Microsoft will be sharing more on the exact update time and process in the coming week.

Family game show, “Who Wants To Be A Million” is back but Frank Edoho dropped