Another piece of icing from Samsung mobile is about to land
on the company’s cake. Again, the Korean company is about to introduce a decent
Android tablet for outdoor use. That device is dubbed Galaxy Tab Active 2, a
rugged tablet that has been in the news way back in June.
Related Posts

However, last week, few details regarding the slates re-surfaced
and it was discovered that it will soon be announced. Though, information about
its specifications was limited, GFXBench has made some of the info about the
Galaxy Tab Active 2 has been made available.

According to the listing, the Galaxy Tab Active 2 possesses better
specs than what it was earlier reported. An example is rather than the use of
1.2GHz Qualcomm Snapdragon 400 processor and 1.5GB RAM, the slate features a
1.5GHz octa-core Exynos 7870 processor and 3GB RAM.
Furthermore, the rugged slate is expected to come with a
native storage of 16GB which is expandable. It is said to be an 8-inch display device
with 1280 x 800 pixels resolution. An 8-megapixel camera will be available on
the rear side, while the front side will include a secondary 5-megapixel selfie
camera. 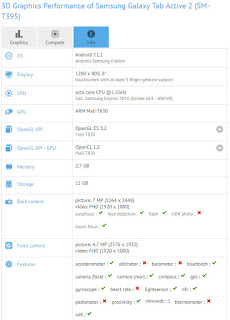 Finally, the Galaxy Tab Active 2 runs on Android 7.1.1
Nougat right out of the box. No info about the price of the device.