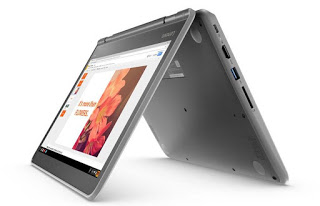 Recently, may notebooks have been emerging with different various
amazing features and qualities. But, most of these laptops costs around $1,000
or even more. Apparently this is not convenient for people on budget who wants
a laptop. Now, here comes the Lenovo Flex 11 for such individuals.

Lenovo Flex 11 is one of the few decent Chromebooks one can
find for around $500 and even less and can actually work as well as one would
want.
Related Posts

The Lenovo Flex 11 is a Chromebook built to withstand
damage, with a rubber bumper around its edges, a water-resistant keyboard tray,
reinforced ports and a sealed touchpad to avoid electrical damage. The device
also has a set of solid 360-degree hinges, which give the device stability when
you decide to flip it for watching videos. 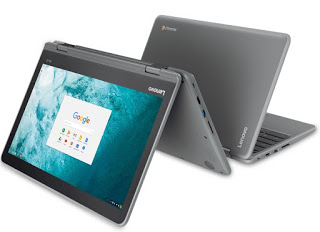 Granted that this device is not as strong at the first
impression as most other Chromebooks, such as the Asus Chromebook Flip or the
HP Chromebook 13. However, when it comes to enduring damage, the Lenovo Flex 11
is certainly more equipped.

When talking about performance, the device can be likened to
other Chromebooks within its price range. The screen is not all that bright, however,
so you might want to remain indoors while using the device.
Like most Chromebooks around now, the Lenovo Flex 11 can
access apps from the Google Play Store on the Chrome beta channel. For
security, Android apps run in a virtual sandbox, away from the core operating
system. Reports state that the device can handle a handful of tabs open at the
same time, but not too much. Surfing the web on this device is not too great,
but it will do.
The Lenovo Flex 11 is not ranked among the greatest
Chromebooks available. However, if you need a cheap laptop with a touchscreen
and a god battery, then you might want to check it out. It will cost you just
$272.70.
Below are some of the
Lenovo Flex 11 Specs;
ChromebooksLenovoLenovo Flex 11
Share

Red iPhone 8 appears in a video