iPhone X specs and features: incredible skill from Apple but still behind Samsung and Android itself 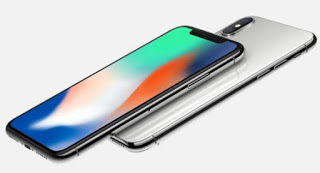 Apple has launched its latest batch of smartphones: the iPhone X, iPhone 8 and iPhone 8 Plus.
Of course as usual, they’re eye-catching and beautiful, but the latest pride of Apple – the iPhone X – isn’t quite as revolutionary as expected by most, especially from a company that can wow the mind of any human to the fullest.
The iPhone X may have been eulogized by Tim Cook as “the biggest leap forward since the original iPhone”, but in reality, you can already find its best features on numerous Android phones, including several made by its great rival Samsung.
The X’s headline feature is its “edge-to-edge” display, which dramatically increases the device’s screen-to-body ratio, keeping it compact.
It’s a very modern design move, which has changed the look of the iPhone for the better. The X is, without doubt, the most attractive version of the iPhone since the iPhone 4, which came out way back in 2010. In truth though, the X simply had to look different.
After all, Samsung has already unleashed three outstanding “all-screen” phones – the Galaxy S8, S8 Plus and Note 8 – but even then it was far from the first manufacturer to do so.
Next to the iPhone X, S8 and Note 8, the iPhone 8 looks bland. A few tweaks aside, it follows the same stale design blueprint as the iPhone 6, released in 2014. This time next year, the 8 will look old.
As well as beating Apple to the punch, Samsung has done a much better job of making an all-screen phone too. The X, unlike the S8, S8 Plus and Note 8, has an unusual cutout – flanked by two “ears” – at the top of the screen, which could prevent iPhone X users from ever watching videos in true fullscreen mode.
That cutout also complicates navigation. You have to swipe down from the left ear to see notifications, and from the right ear for the Control Center. This isn’t exactly information overload, but it’s not particularly intuitive.
Back in 2013, Tim Cook described OLED screens – which feature on the best Android phones, including the Note 8 and LG V30 – as “awful”, criticising colour saturation and lack of brightness. However, in the iPhone X, Apple has finally, after literally years of hope and speculation, equipped one of its handsets with an OLED display.
The iPhone 8 and 8 Plus, meanwhile, are stuck on LCD. It’s clear that the company now considers OLED to be the superior of the two screen technologies.
However, the situation isn’t quite that straightforward. Even now, after its launch, Apple is struggling to manufacture the iPhone X. Samsung is reportedly Apple’s only supplier of OLED displays and, as such, the phone won’t be released for some time yet, and is expected to be in relatively short supply when it does eventually come out.

Still though, Apple has been delaying the inevitable and, up to this point, building its infamously expensive phones around a screen technology it knows to be second-rate.
Related Posts

With the iPhone X, Apple has also boosted resolution and pixel density, from 1,334 x 750 (326 pixels per inch) on the iPhone 8 and 1,920 x 1,080 (401 pixels per inch), to a much sharper 2,436 x 1,125 (458 pixels per inch).
That finally puts the iPhone in line with flagship – and even some mid-range – Android phones, which have had much sharper screens than the iPhone for several years.
Those aren’t the only departments Apple is playing catch-up in.
Facial recognition technology, for example, happens to also be one of the key features of the Note 8 (and S8 and S8 Plus).
What’s more, those phones found room for a fingerprint sensor too – bewilderingly bad ones, admittedly, though this could easily have been avoided by Samsung – whereas Apple’s iPhone X has completely ditched Touch ID, to the dismay of many potential buyers.
Face ID looks futuristic, but Touch ID is trusted, and not exactly outdated either. After all, it still makes an appearance on the iPhone 8.
According to reports, Apple had been planning to build Touch ID under the iPhone X’s screen, but had to abandon the idea very recently, due to manufacturing issues. If true, this suggests Apple never actually wanted Face ID to be the main method for unlocking the phone.
The X isn’t out yet, but it’s clear that a lot of consumers don’t feel entirely comfortable with Face ID, as they feel it might not be as reliable as Touch ID – especially in particularly dark or bright conditions – or as secure as it.
The facial recognition technology on the Note 8 and S8 isn’t especially slick – it’s there an an alternative to the fingerprint scanner and iris scanner. While Apple’s face-scanning technology may prove itself to be far superior to Samsung’s, it would have been nice for the iPhone X to have a familiar and well-liked alternative to the unproven and, in some cases at least, intimidatingly futuristic, Face ID and the old-fashioned PIN.
Finally, Apple has also embraced wireless charging – once again, like several of the best Android phones, some of which have offered it for well over a year – with all three of its new iPhones.
However, it hasn’t yet managed to build a wireless charging accessory. It’s instead pointing customers towards third-party options built by the likes of Belkin and Mophie.
Tim Cook would have you believe the company is making waves, but in reality it’s actually trying – and in some departments struggling – to keep up with a number of less-celebrated, and significantly cheaper, Android smartphones.
While the iPhone X looks like a highly desirable smartphone, it’s a leap forward for iPhones, not smartphones as a whole.
Source
Androidgalaxy note8galaxy s8iPhone 8
Share