Gionee is absolutely working serious hard lately. Just few
days ago the Chinese company announced the M7 and M7 Power and now, a new TENAA
filing revealed that another budget friendly 18:9 device is about to find its
way to the market.
The device dubbed Gionee S11 recently showed up on the
Chinese certification authority’s website. It appears Gionee is not taking the
ultra-wide aspect ratio for granted as the S11 listed will be using a
6.01-inch, 1080 x 2160 pixel AMOLED panel. Possibly, coming with the same
FullVision one used in the M7. 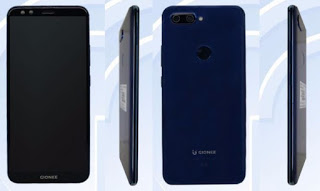 According to TENAA, the unit is powered by a 2.5GHz
octa-core chipset, supported with 6GB of RAM and 64GB native storage. As far as
camera is concern, the Gionee S11 will also feature a total of four cameras –
two on the rear and two to take care of selfies. It might actually come with
same camera setup as the M7 – 16 MP + 8 MP on one side and 20MP + 8MP on the
other, respectively.
TENAA also says, the body measures 155.8 x 72.6 x 6.95mm and
weighs 178 grams. There is a sealed-in 3,600 mAh battery that is to keep the
light on. Other cited specs includes a fingerprint reader on the back and it
runs on Android 7.1.1 Nougat-based OS. 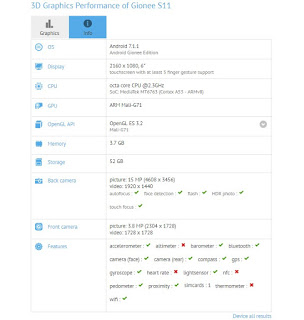 To make the whole story interesting, the Gionee S11 name
popped-up on GFXBench recently as well. According to the benchmark, a 6-inch,
1080 x 2160 pixel display was also reported as well as a 16MP main camera. But,
other details look different, such as the quad-core MediaTek MT6763 chipset,
4GB of RAM and 4MP front shooter. Since the S10 has two other variants, S11 is
expected to do same, hence may be reason for the mismatch.
We hope to get some official info from Gionee shortly.
ALSO READ:  Visionox Patent Reveals How Xiaomi Foldable Phone Works

Sonim XP8 Specs and Price – The Toughest Smartphone In The...