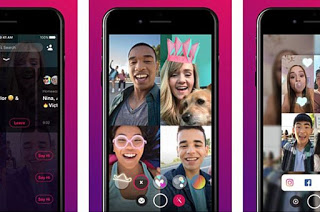 Few months ago, reports says that Facebook is developing on
a standalone group video chat app. Well, now the social network giant has finally
begin the rolling out of the app, called Bonfire.
Related Posts

However, the roll out is yet to be available for everybody
at the moment, restricted to only iOS users in Denmark.

Bonfire allows its users to perform a video chat with several
participants simultaneously. It is allegedly similar to the Houseparty app,
which is now pretty popular among teens.
Facebook issued the below statement after being asked to
comment on the app,:

“At Facebook Inc
we continue to build and test new products and services. We already have many great
experiences for people to video chat in groups, or as individuals, across the
family of apps, including Messenger. We are interested in how everyone uses
technology and how we can build great experiences for them. We’re running a
very small test in Denmark of an app we call Bonfire. We have nothing further
to share at this time.”