All Android-powered Nokia smartphones will be blessed b
updated to Android 8. Juho Sarvikas who is the HMD Global’s Chief Product
Officer, made this known to us via Twitter, by reassuring users that even the
low-end Nokia 3 will be in the Oreo party.
This bit of news might not be too remarkable to some, as
Google mentioned that current Nokia manufacturer HMD Global and other companies
are “scheduled to be launching or
upgrading new devices to Android 8.0 Oreo” back when it unveiled the
latest major version of its mobile OS. 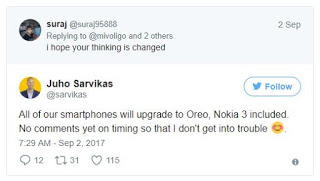 Though, the search engine giant didn’t mention any specific
models at its keynote event, leading some to speculate that the Nokia 3 might
be left behind due to it having a different processor than the Nokia 5 and 6. Therefore,
it’s good to see Juho putting these gossips to rest.
As you might know, HMD Global likes to adorn its handsets
with an almost stock version of Android. This is done to ensure a bloat-free
experience and, no less importantly, timely updates. The company has promised
at least two years of OS update support for its devices, which means that the new
Nokias should receive the next major Android update as well.
Join Us On Telegram
ALSO READ:  Oppo A93 Specifications and Price
Advertisment