By Andre Falana On Aug 8, 2017
Share
Join Us On Telegram
One good thing about YouTube’s desktop version is the pack of the special features attached to it. One of those special functionality we are talking about is speed controls: ability to speed up or slow down a video is especially useful for educational videos, or just looking for those tiny details that are not easily noticeable. 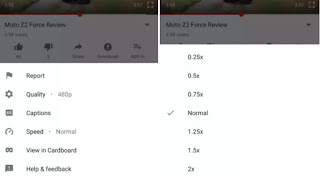 Now, YouTube appears to have added speed controls to its mobile application. According to a report from 9to5Google, there is an option to select video speed on YouTube for Android, version 12.29.57, but the option is yet to be available for every user out there. As at the time of reporting, we are yet to have access to such.

The speed options available on mobile seem to be the same as on desktop: 0.75x, 0.5x, or 0.25x the normal speed, or faster at 1.25x, 1.5x, or 2x. In order to bring up those controls, users will need to tap on the dots menu in the upper right corner.
Related Posts

Google has not release any official statement based on this new development, however, the feature seems to be real.
Meanwhile, you can give it a try, do you see the new speed controls?
Source
Share