Skype Preview set to be launched on desktop platform

By Andre Falana On Aug 23, 2017
Share
Join Us On Telegram
Skype’s Android and iOS app design was seen as smooth and
stylish, by some users but not quite so by some others. Though, Microsoft appears
to be immovable as it still uses the same design on their mobile apps. 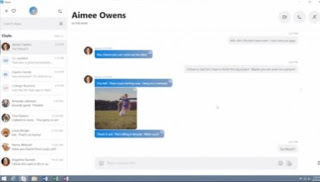 Now, Skype has launched a similar design for its desktop
platform. The company has opened a Preview for the new look and features. For
now, this Preview will not replace the standard Skype, though.
This new desktop design is a lot whiter than the previous
models, with colorful highlights and gradients, and a recurring wave motif. It
also adds Snapchat Stories. There are also new tools like image-sharing within
calls, and reactions.
This desktop version also includes some unique features,
such as the ability to refer to a specific person during a group conversation,
the ability to react to comments, and a new notifications panel.
Related Posts

There is also a chat media gallery for easy location of
images and/or videos previously shared in a conversation. To check out this
Preview version, go to Microsoft’s Skype Insider page, register with a
Microsoft account, and download the appropriate version for your device.
This new look and approach is a much-needed improvement to
the platform, according to some reports. Skype had been losing its place among
all the chat apps. However, this change in design is mainly in response to
complaints about missing functionality and performance issues. Nevertheless,
desktop users usually care more about function than form, so the new redesign
might not satisfy everyone.
At least, not until the company is able to add all of the
classic Skype’s features to the new design. However, the company warns that the
new Skype is not complete, and there are several features missing. Let us just
hope that the company allows the desktop redesign stay for a little while more
before making the transition mandatory.
Source
skype
Share

Skype for Business Online to be Shut Down in 2021