By Andre Falana On Aug 3, 2017
Share
Join Us On Telegram
It’s gradually leaking, escaping from the bag. Leak says the
Honor Note 9 would be sporting a 6.6-inch edge-to-edge bezel-less screen. Recall
that its predecessor Note 8 also came with a 6.6-inch display that features 2K
resolution. It is expected that the Note 9’s 6.6-inch will continue to support
2K resolution. 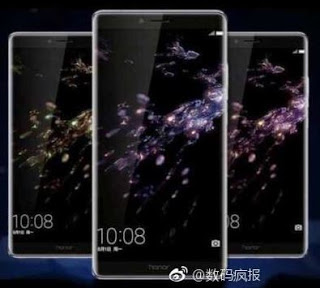 The Honor Note 9 is likely to be powered by the Kirin 965 chipset,
an upgrade to the Kirin 960. Though the Kirin 965 SoC has not been officially
unveiled by Huawei.
Related Posts

The Honor Note 9’s chipset is also expected to come with a 6
GB RAM and an internal storage of 64 GB. It is projected to carry a pair of
12-megapixel cameras at its back and it may house a 4,600mAh battery to keep
the lights on. This simply means the Honor Note 9 will be honoured with a
100mAh extra battery supply compare to its predecessor.
Rumours says that the Huawei will be announcing the Huawei
Mate 10 flagship phone in October. It is expected to be powered by Kirin 970
chipset.
Android
Share