TellForce Blog
Home OS iOS iOS 10 now controls 87% of all iDevices
Twitter
Pinterest
Linkedin
ReddIt
WhatsApp
Tumblr
Email
Print
Telegram
Back in June, iOS 11 was announced by Apple at the WWDC, but
users are yet to get its official version because they would have to wait
till September this year for its availability. 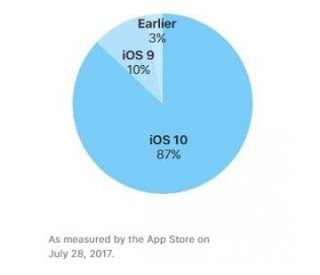 Nonetheless, iOS 10 which is the latest official version, in
the recent reports, keeps dominating the iOS ecosystem. According to the report,
87% of the iOS devices are running it.

The preceding version, the iOS 9, commands just 10% of the
devices while earlier versions account for the 3% left of the pie chart.
These numbers augur well for the iOS 11 adaption – the vast
majority of iOS users are obviously installing the latest version available to
them.
Source
ALSO READ:  Instagram: Update Your App To Choose Who You Want To Poll