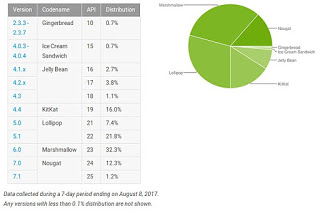 Precisely, Nougat version 7.0 is now on 12.3% of devices,
while version 7.1 is on just 1.2%. With 32.3%, Marshmallow is still the most used
Android OS version. That number represents a slight increase of 0.5 percentage
points from preceding month.
While Lollipop and KitKat also have noteworthy shares, there
has been decline when compared to numbers from July. Jelly Bean now controls
7.6% of all active Android devices out there (a slight descent), while the
share of Gingerbread and Ice Cream Sandwich remains the same.
Source
Join Us On Telegram
ALSO READ:  Despite losing billions To MMM, Nigerians another Ponzi scheme, Loom
Advertisment