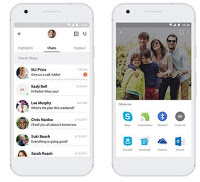 Microsoft announced a new version of Skype dubbed “the next
generation” last month. The new app was released for both Android and iOS
platforms which arrived in a completely redesigned user interface with new
features and improvements.
Some features were eliminated and replaced others when the
redesigned Skype was released.
This update did not go down with the users as
they found it difficult to work with it.
Due to the unpleasant users’ report, Microsoft has decided to bring back
some of the eliminated features during the major update. And also, the
developers have added even more feature to Skype for Android and iOS.
Related Posts

Thus, the first features that have been restored in the last
update are the status display for contacts on the home screen, which will let
Skype handlers to see active users at first look. Then, all the internal
sharing capabilities on both Android and iOS platforms have been added again so
that users can continue to share to Skype chats from other apps and services.
Among the new features announced today, Skype says it has
added more themes and colors options to make it easier to personalize Skype. Furthermore,
the user interface has been updated again to further improve legibility and
make it simpler to navigate and access conversations. 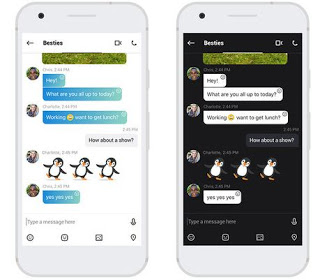 Lastly, a couple of fixes have been implemented that are
supposed to address issues that users experience when trying to delete contacts
or conversations. Some other fixes for notifications and multi-tasking while in
a call have been included in the update too.
So, there you have it, folks, Microsoft seems to be
listening to its users. Otherwise, we wouldn’t have seen these changes so soon
after a major Skype update was released.
Source via Skype
Android
Share

Google Keep for Android now has undo and redo functionality