LG Gram 15 Specifications: Just too light like some smartphones

By Andre Falana On Jul 11, 2017
Share
Join Us On Telegram
Laptops that has smaller weight tend to suffer a bit in
terms of screen size. But, not all large-screen notebooks are weighty. The LG
Gram 15 is a case in point of the second category. LG Gram series consists of 13-inch,
14-inch and 15-inch variants, and these notebooks are pretty light for their
screen size. Though, the talking point of the LG Gram series is their good
performance in terms of productivity. 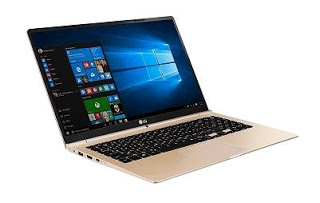 To get more products, click here
The LG Gram 15 is the 15-inch variant of the Gram series.
The major marketing area of this device is the larger screen in the smaller and
lighter body. The body of the laptop is made of a magnesium alloy, which does
not feel just like a premium aluminum-chassis laptop body that is found on some
other laptops. Hence, one might under-rate the notebook because of its look and
feel of the LG Gram 15. Nonetheless, the laptop will hold out the daily wear
and tear well enough.
The display on the Gram 15 is quite nice. The colors come
out sharp, and it has excellent off-angle viewing. It does get reasonably
bright, but you might still struggle with some of the glare from the gloss
touchscreen. LG also includes a Reader Mode that lets you quickly reduce blue
light.
Its audio unit in the Gram 15 is not too good. But the truth
is that you cannot get all in life, one thing must be sacrifice for somethings.
The audio has to give way for its lighter body. Nevertheless, LG built in DTS
headphone: X processing for improved audio quality through the
headphone/microphone jack. Thus if you make use of headphones you would enjoy
the sound better.
Extra ports include two USB 3.0 ports (Type A), a micro SD
card slot, HDMI output and a USB Type-C port that supports video out,
high-speed data transfer and Ethernet through an adapter.
The Gram 15 comes with a seventh-gen Intel Core i7-7500U
processor, 16GB of memory supported by an integrated Intel HD Graphics 620
graphics card. This surely supplies it enough power to get through average
computer tasks.
Related Posts

The battery life isn’t that bad too, with an average of nine
hours of usage on a full charge. However, the exceptional feature is the weightlessness.
It weighs less than 1.13 kilograms and that alone would help you feel as if you
are going around with a tablet.
General Specifications
of LG Gram 15

US Prisoner Used Drone to Escape From A Maximum Security Prison

How To Connect Your Android Phone To Your TV