By Andre Falana On Jul 24, 2017
Share
Join Us On Telegram
Related Posts 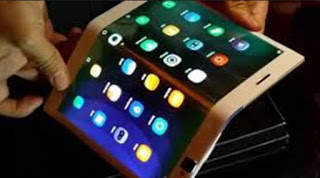 Recall how Lenovo gripped the attention of the tech world on
June 9, 2016 during the company’s Tech World meeting. Meghan McCarthy, a YouTuber
showed a bendable phone that was folded into a contraption that she wore around
her wrist. McCarthy as well displayed a tablet that was folded into the size of
a phablet, and raised it to her ear in order to simulate a phone call.


Now, the tech company continued with the innovation by presenting
the Lenovo Folio concept during Lenovo Tech World 2017. The device comes with a
flexible touchscreen that produces from 5.5-inches to 7.8-inches and goes vice
versa. The resolution is 1440 x 1920, and powerd by the 2013 Snapdragon 800
chipset with an e-SIM. It also runs on Android 7.0.
Recollect, this is still a model which means that before the
mass production of the original device, there could be some upgrade on the
aforementioned specs.
The video below this article shows off the Lenovo Folio
concept. Don’t worry about the language used if you can’t understand the audio,
because the clip is not in English.
This device has now appeared at the Lenovo Tech World for
two consecutive years. Possibly by next 2018 show, it will be ready for mass
production.

Watch the video below..