Google introduces SOS Alerts for emergencies, less annoying to that of Facebook

By Andre Falana On Jul 28, 2017
Share
Join Us On Telegram
Google is seriously working on its apps these days, either making significant updates or releasing new ones. Now, its focus is making the world a safer place to live. Google will start putting emergency information about fires, floods and other disasters in relevant search results and Maps locations. This feature is called SOS Alerts, and it includes information such as news stories, emergency phone numbers, relevant websites and updates from local officials. 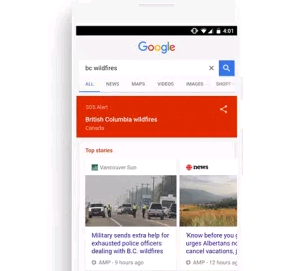 These alerts will be created and crated by Google staff. It also means that Google’s teams will need to pick and choose which events get SOS Alerts. The tech giant has already warned that it will not cover everything. While the tech company cannot guarantee that everyone will get a SOS Alert for every major crisis, it aims to make them available more broadly over time. Also, it seems like Google could be planning to cover attacks as well. Its help site says that alerts may appear for a “human-caused crisis”.
This SOS Alerts feature is meant to help out people who are actively looking for information about a disaster. But Google says that in some cases, it may send out push alerts to people in a disaster area directing them to this information too.
These alerts seem to be Google’s version of Facebook’s Safety Check feature, which provides similar information and lets people check in to tell friends that they’re safe in a disaster. However, Facebook’s feature received a mixed response from its users. There has been controversy over when it gets activated – Facebook handed over activation to users since and even upon its activation, the feature is very annoying.
Google tries avoid this issue by having this feature be informational only. For one thing, Google does not have a widely used social network to base such a feature around, so there’s that. This may be less useful in some ways, but it will offer additional information to those who want it. That sounds more helpful.
Source
SOS Alert
Share