By Andre Falana On Jul 1, 2017
Share
Join Us On Telegram
Recall that in 2016, Facebook announced a new feature it named “Find Wi-Fi” on android smartphones and iPhone and it made it available for few countries. 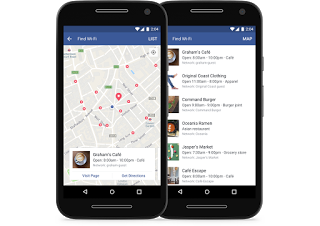 This new feature allows Facebook handlers on tour or those who finds themselves in an unfamiliar locations to locate any closeby Wi-Fi hotspots.
Well, Yesterday, Facebook announced that the Find Wi-Fi feature has been made available globally for both its users on Android and iOS platforms.
Facebook users who have the feature on their smartphones will be able to find available Wi-Fi hotspots that have been shared by businesses with Facebook from their Page.
Related Posts

How to Turn the new feature on
For you to locate new Wi-Fi hotspots working with the new functionality:

Step 1. Launch your Facebook app on your Android smartphone or iPhone.
Step 2. Tap the “More” tab and then “Find Wi-Fi.”

Your Wi-Fi connection would definitely be come up for you browse with the nearest available hotspots appearing on the map, if any exist.
There is no need to download anything since this new feature is automatically from the server’s end. But you will need to check regularly if the Find Wi-Fi feature has reached your side.
Source
Androidfacebook
Share

How to understand your employees and keep them happy

N-POWER 2016 Online Past Questions and Answers