By Andre Falana On Jul 6, 2017
Share
Join Us On Telegram
Chinese Smartphone making company Ulefone has cloned the
Galaxy S8 from Samsung by mimicking the design and some of the terminologies
used to describe some key features on the phone. 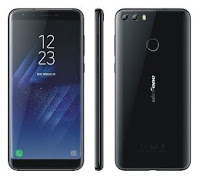 The cloned Samsung Galaxy S8 is called Ulefone F2 with
almost a 100% lifting of the design of the Galaxy S8. Still the copying didn’t
end with the design, Ulefone is copying terminology as well. For instance,
Samsung calls the near bezel-less display fo the S8 Ïnfinity Display”; Ulefone
calls that of the F2 “Infinite Display”.

Meanwhile, the Chinese OEM is claiming that the Ulefone F2
will be the world’s first smartphone with “infinite” display. Hahahaha i can’t
stop laughing. Something you borrowed elsewhere? Anyway, we all know for sure
that the F2 will not be the first of any such thing. The F2 is a blatant copy
job (words according to Yomi Adegboye)
Related Posts

But come ooo, will you call this nemesis falling on Samsung?
Remember Samsung themselves are not strangers to the habit of copying the
design of another product. For instance, Apple fought a bitter war against
Samsung for years over patent infringements. But not even Samsung was as
blatant as Ulefone is being right now.
The most dangerous and confusing part now is if the Samsung
Galaxy S8 and the Ulefone F2 are placed side-by-side, it will be hard to tell
which is which unless you check the brand name and logo.
Now talking about the features of this S8 Clone, Ulefone F2
features an 5.7-inch “infinite display” with same 18.5:9 aspect ratio that the
Galaxy S8 has, and 8 GB of RAM. As at now, no other info is available but will
be communicated to you as soon as it pops up.
Androidgalaxy s8Ulefone F2
Share

Gigabyte Aero 15 Specifications and Price: Talking About Color Display In Another Fashion