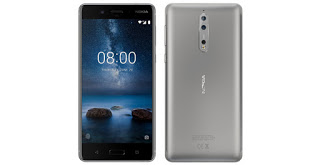 HMD Global, the manufacturer and the owner of Nokia phones is set to announce at least one high-end smartphone by the end of 2017 as expected. Tongues have wagged, online media outfits never stops pushing out leaks, just because the anticipated HMD’s first Nokia-branded flagship smartphone, but unable to get a better look at the device until recently.
If you’ve been following Tellforceblog news feed, then you should have some knowledge about about the Nokia 8, a high-end smartphone that will spot a dual Zeiss camera and some classy specs. All thanks to Evan Blass, we can now see what the Blue version of the Nokia 8 looks like.
ALSO READ: Leak: Nokia 8 allegedly comes with dual Zeiss camera.
Related Posts

Today, Evans Blass published yet another leaked image of the upcoming Nokia 8, but this time around, it’s in Silver. Apart from the color, no visible differences between the Blue and Silver variants of the Nokia 8, since they are still the same device.
Unconfirmed reports says HMD Global plans to launch the Nokia 8 in late July and that the smartphone will cost less or around €600 ($600 in the United States).
Other specs aside the 13-megapixel Zeiss dual-camera setup on the rear side includes a Quad HD display, 4GB or 6GB RAM, 64GB native storage which is expandable and a powerful Qualcomm Snapdragon 835 processor.
Again, the phone will run on Android 7.1 Nougat, but we expect the Finnish company to excite its fans by providing Android O for the device. The reason is since all the new Nokia-branded Android phones features near-stock rom, it should easier to push major updates to them.
Source
AndroidNokia 8
Share

Photos: Etisalat Nigeria Finally Confirmed That It Has Changed To 9mobile