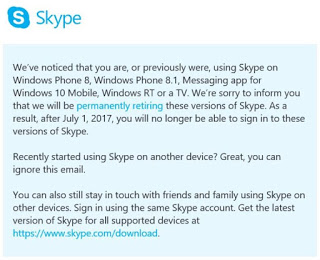 Microsoft has officialy indirectly killed Windows Phones, though we know it’s already dead base on its current form. Although, Microsoft could wake up one day to resurrect it again, but for now the almost all services on the obsolete OS are being closed up, instead of wasting resources on it, it’s better to spend it on something else.
The Redmond based company says it would discontinue the support of Skype apps for Windows Phones effective from July 1. In simple language, Skype apps would no longer work on Windows Phones from July 1, 2017. This follows the discontinuation of Skype WiFi apps at the end of 2017 first quarter.
So, users who are using or have previously used Skype on Windows Phone 8, Windows Phone 8.1, or the Messaging app for Windows 10 Mobile, Windows RT and TVs, Microsoft apologizes for the retiring of these Skype apps permanently from next month. After July 1, it would be notice that you won’t be able to sign in to these versions of Skype.
The only way to continue the use of Skype after that July 1, is to migrate to another device that supports Microsoft’s Skype services.
Source. mspoweruser
ALSO READ:  Why OS Below Windows 10 Won't Work With Office 2019
Advertisment

Windows 10 November 2019 Update: The next Major Windows Update is...