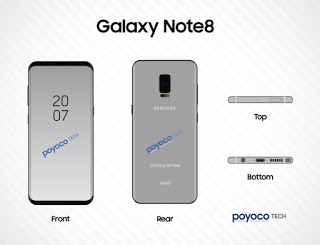 We are yet to cope with the amazing buzz released by Samsung when it unveiled its Galaxy S8 and Galaxy S8+, now the rumours for its next flagship have taken over the town. Most of the reports alleged the Galaxy Note 8 will be featuring a dual-camera setup, and a crazy big 6.3-inch edge-to-edge screen, of course, reason for bearing the name NOTE.
But, come to think of it, if the Galaxy Note 8 does indeed comes with 6.3-inch display with 9:18.5 aspect ratio, moreover, with the rumour that it will come with the same type of Infinity Display like that of the Galaxy S flagships. That simply means we are just getting another Samsung Galaxy S8+. Just that, Note 8 might be packed with a lot of extra features to make it more relevant.
Related Posts

If the latest rumour on the announcement date for Galaxy Note 8 is true, then Samsung knows what its doing. The report said Samsung is planning to unveil its new Galaxy Note late in the August. This strategy is to announce the device ahead Apple’s announcement of the new iPhone 8. Samsung trying to get an edge in the race against its main rival.
The announcement in the late August would go against the tech giant’s tradition of announcing its new Notes at IFA, which is one of the biggest expos for consumer electronics. And the 2017 edition will start on September 1.
Like I always say, it’s still rumour, time will tell whether the rumor is true or not, however, this should not be ignored as it seems possible.
galaxy note8
Share

Is TBC a real Digital Coin or a Scam?