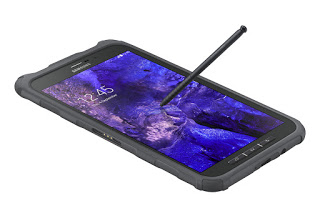 Ruggedity is what most people need, especially engineers and related professionals. Naturally, such professionals are rugged themselves, they don’t know how to handle fragile gadgets. However, after three years of original Galaxy Tab Active debut, Samsung has finally remember them.
According to a latest report, the South Korean tech giant is said to have been working on the Galaxy Tab Active 2, which may be officially announced this fall at IFA 2017.
As stated earlier, Samsung targets the industrial and business professionals for its series of Galaxy Tab Active rugged tablets.
The device was dust and water proof, as well as shock proof. Though Galaxy Tab Active tablets’ specification were that of entry-level specifications.
Samsung released two variants of this tablet, which includes LTE+Wi-Fi variant and the Wi-Fi only variants. The Korean tech giant is currently working on the Galaxy Tab Active successor.
The report stated that Samsung is currently working on two variants of the Galaxy Tab Active 2, which are SM-T390 and SM-T395 . Just like it had always been from the way Samsung names their devices, it is believed that the SM-T390 variant is a Wi-Fi only while the SM-T395 variant of Galaxy Tab Active 2 would come with LTE + Wi-Fi.
The report also stated that next generation Galaxy Tab Active device will be launched in European and Latin American markets. It could however extend the device availability to other markets as well.
No current information about the upcoming Galaxy Tab Active 2 specifications and price but be rest assured that Tellforceblog.com will  will publish more information as soon as we get it.
Source
Join Us On Telegram
ALSO READ:  Sharp AQUOS R5G Specifications and Price
Advertisment